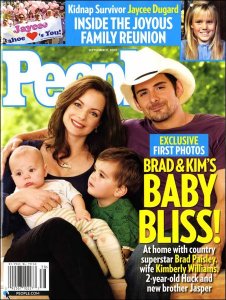 Country singer Brad Paisley and his actress wife Kimberly are the cover stars of the recent issue of PEOPLE magazine along with sons William Huckleberry, 2, and Jasper Warren, 4 1/2 months.

Speaking of making the transition of one child to two children Kimberly says:

“Two feels like more than two. It feels like five sometimes! But we’re so fortunate that Jasper is happy most of the time.”

And unlike many celebrity parents, the Paisley’s rely on family and friends instead of a nanny when they have work commitments or a little ‘me’ time.

“We have a couple of trusted friends and babysitters and two sets of grandparents. We don’t have anybody on payroll. That was a big deal for me. I’m lucky that my parents are in such good shape, and they are only 60.

“The other night, I called my mom and said, ‘We’re thinking about going to see a movie. What are you guys doing later?’ And they said, ‘We were just going to get something to eat, and we’ll come by when we’re done.’ They came and put Huck down and fed Jasper, and then we went to that movie. It’s nice to do that and then come home and know that they are with their grandparents and they are having a better time than when we’re here…and learning more probably!”