She has the body and looks that can make many women envious and she also features in the 2016 swimwear edition of Sports Illustrated but presenter/model Chrissy Teigen has revealed that she was actually going through IVF treatment at the time of the shoot that took place in Zanzibar.

“I was getting my shots and everything in Zanzibar, I had a little medical kit. ‘It was hard because you bloat from it, and you bruise – if I hit the wrong area. That’s the kind of things we had to cover with makeup.”

Now expecting a baby girl in April with husband John Legend, the 30-year-old says despite the fact many choose to pose for a shoot during their pregnancy, it’s not something she would do for her own personal use but she would take the time to consider doing something like that for a magazine — if it was for the right one.

“John and I aren’t the kind of people to have a photo of ourselves in our house, like embracing the pregnant and naked thing. But if it were for a cool magazine and beautifully done, I would do that…[Sports Illustrated Swim Edition], I would have definitely done pregnant!”

Back in July Harry Judd and wife Izzy announced they were expecting their first child together. And now with only a few more months to go until the impending arrival, the McBusted star has revealed he can’t wait to become a dad. Speaking to the Daily Mail, he said:

“I have always longed to be a dad and have been broody for years, I cannot wait to see Izzy be a mum either.”

The pregnancy was very much longed for by the pair who sadly suffered a miscarriage in 2014. But the road to parenthood hasn’t been easy for the couple as they were struck with fertility issues when Izzy was diagnosed with polycystic ovaries – resulting in them going down the path of IVF.

“The hardship was before the IVF when nothing was happening, but using the treatment was a really positive achievement for us. We didn’t consider IVF for a couple of years, but it got to the point when we had exhausted everything else.”

END_OF_DOCUMENT_TOKEN_TO_BE_REPLACED

To read all about baby Freja’s birth, picking her name and how they’re finding parenthood click END_OF_DOCUMENT_TOKEN_TO_BE_REPLACED

Home and Away actress Emily Symons was spotted taking a walk in the Sydney sunshine last week. She and boyfriend Paul Jackson expect their first child in August. After going through various bouts of IVF the 45-year-old was ecstatic to discover she was pregnant.

“I very much thought it couldn’t happen and I was too old.

“I thought it would be impossible but it isn’t. I’d given up really, I thought I had tried every avenue that was available to us. My ­advice is to not give up if you’re feeling a bit­ ­overwhelmed by the whole ­process.”

Although the former Emmerdale star did admit that going through the process can be hard.

“It is very difficult when you are doing it because obviously there are only two results and only one of them is good.

“It is a waiting game and it is very gruelling on your emotions and your relationship. I am so ­inspired by what women go through to achieve their dream, to become pregnant and have a family, you’ve got to be prepared to do that stuff to get the baby.” 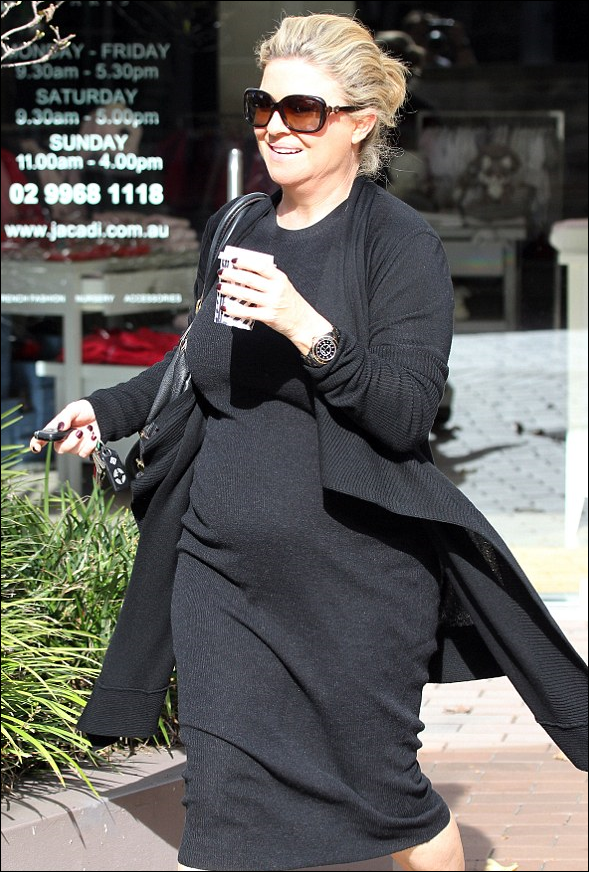 Kim Kardashian appeared on The Today Show on Monday, April 27th 2015 and opened up to host Matt Lauer about her struggle to conceive a second child with husband Kanye West. The 34-year old said: “I still have hope” that daughter North, 22 months would have an older sibling but doctors have advised her to possibly start looking in to other options.

“They say if you’ve been trying for a year, then you usually need a little bit of help.

I had a tough delivery, so I understand what my challenges are. I mean, I’m seeing the best doctors and I’m trying to do everything that I can to make that happen.

We’re trying to figure out what’s going on,’ she said. ‘They have recommended to me to get a surrogate.”

But despite the advice from professionals, the Keeping Up With The Kardashians star says she at the moment she still wants to keep trying naturally.

“I would like to hold out a little bit longer, and still try. I still have hope, so I’m just going to keep on trying. Never say never. I mean, we haven’t talked about adopting.”

And although the desire for a second child is strong she still counts herself very lucky to already be a mum of one.

“I think you get kind of over it to the point where, I’m so blessed that I have one, and I don’t want to take my focus off of her so much.”

Giuliana Rancic says she is fed up of people saying that the reason she is unable to conceive a child is due to her being skinny. Hitting back at those ‘ignorant people,’ she said:

After sadly suffering a miscarriage back in October, Bill and Giuliana Rancic are giving IVF another try. The procedure can sometimes be compared to riding the storm with Giuliana receiving over 60 shots a month in a bid to get pregnant.  Speaking at the launch of the new Volkwagon EOS on Tuesday, November 16th, she said:

And while the couple haven’t given up hope that IVF will work, they have left themselves open to other options in the future if all else fails.

“We’ve gotten probably 40 women who have offered to be surrogates [and] the other day I got an email saying, ‘My niece is having a baby, and she’s giving it up for adoption and we’d like to give it up to you. It’s just amazing how many people are incredibly generous and so giving.”

When TV presenter Sophie Blake was diagnosed with Asherman’s Syndrome last year, she resigned herself to the fact that she would never be able to give daughter Maya, 3, a sibling But the 37-year-old  has stunned doctors by in fact going completely against the odds and becoming pregnant once again. She and fiance Scott Nicholls, are now expecting their second child in May 2011.

To read how Sophie found out she had the condition, why she spoke out to raise awareness and to see a bigger photo of the family click END_OF_DOCUMENT_TOKEN_TO_BE_REPLACED

GMTV weathergirl Clare Nasir appears in New magazine with her gorgeous baby daughter Sienna Clare, 9 weeks, and talks about what a miracle her little girl is. She married husband Chris Hawkins in 2005 and the pair soon got started on trying for a family. But after numerous disappointments and failed fertility treatment, the pair finally got what they wished for last year when Clare found out she was expecting.

Sienna was born 7 weeks early on November 11th 2009 after a very difficult pregnancy. After spending five weeks in the special care baby unit at University College Hospital in London she was finally able to go home with her proud parents at Christmas.

After several years of suffering from endometriosis, America’s Top Chef host Padma Lakshmi is expecting her first child. A rep for the star said:

“As a result of her condition, this pregnancy has been referred to by her physician as nothing short of a medical miracle, and due to its delicate nature, we ask/implore the press to respect Ms Lakshmi’s privacy at this time.”

The identity of the dad is not known. Also due to her suffering from the condition, Padma has set up The Endometriosis Foundation Of America as a place to help and offer support to other women who are also in the same situation.

Most parents-to-be are excited about the new lives they’re about to bring in to the world, but none more so than Eastenders actress Jo Joyner and her husband Neil Madden, who, after trying for children for over 3 years, took the brave decision to undertake IVF — and on their first attempt were blessed with twins! Jo and Neil recently spoke about their emotional rollercoaster ride, the pregnancy and how they can’t wait to meet their babies at Christmas.

To read the interview and to see additional pictures click END_OF_DOCUMENT_TOKEN_TO_BE_REPLACED

The Young and The Restless’ Michelle Stafford has revealed that she is expecting her first child — a baby girl — in December — via surrogate. After trying and struggling with many fertility treatments the actress says,

“After a three-year journey through hell, I’m elated, ecstatic and feel ultimately lucky to be able to announce I’m expecting my own child via surrogate in December.”

Together they talk about their fertility struggles, and the journey they went on in order to give daughter Blossom, 5, a sibling.

To read the interview and to see additional pictures click END_OF_DOCUMENT_TOKEN_TO_BE_REPLACED