Prince Albert and Princess Charlene of Monaco leave Monaco Cathedral and pose for photos after the Christening of their twins, daughter Gabriella Therese Marie and son Jacques Honore Rainer, 5 months, on Sunday, May 10th 2015. 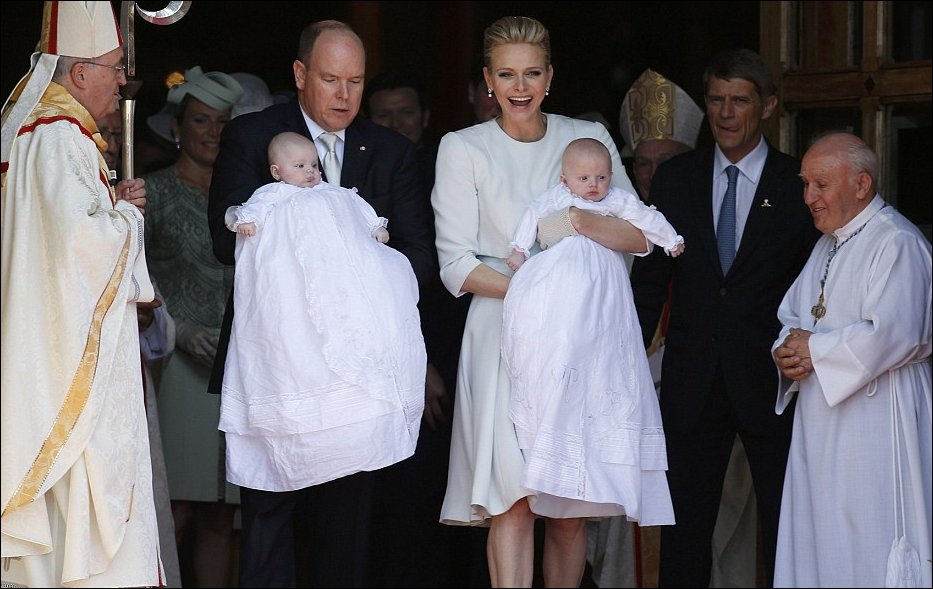 Vincent Simone may not have won the Strictly Come Dancing trophy this year but he has another reason for beaming from ear to ear — his “little angel” son Luca William, 5 months. The 31-year-old and girlfriend Susan Duddy — who have just celebrated getting back together — held the christening at the 18th century Grosvenor Chapel in London’s Mayfair. With Vincent being Italian, all the stops were pulled out for the day as christenings are “a big deal for us.”

Guests included Vincent’s former Strictly partners Rachel Stevens, Louisa Lytton and Jo Wood. Judge Len Goodman, dancers Flavia Cacace, Erin Boag, Darren Bennett and Lilia Kopylova were also in attendance. Vincent’s family flew all the way from Italy for the occasion, while Susan’s family travelled from Northern Ireland — her Grandad even boarded a plane for the first time to make sure he didn’t miss out on the big day.

If there’s one thing that 7-month-old Dexter Lloyd Henson loves, it’s attention. So when more than 100 guests gathered on Saturday, August 29th, at the the family’s farmhouse in Wales for a party to celebrate his Christening, Charlotte Church and Gavin Henson‘s little boy was in his element.

As with the Christening last year of Dexter’s big sister Ruby Megan, 2 on September 20th, the service itself was an intimate affair, attended only by immediate family and godparents — but come the evening all the stops were pulled out, with continious entertainment, a fully stocked bar, fireworks and food in a giant marquee in their garden.

Like his mother, sister and grandmother, Dexter’s baptism took place at St Mary of the Angels Catholic Church in Cardiff. Father Christopher Delaney, who baptised Charlotte as a baby and who baptised Ruby last year, conducted the service.

“Everyone knows Father Delaney,” says Charlotte. “He has been around since my mum was at school. He’s brilliant because it’s all quite informal, and rather than just saying the words, he explains each part of the service as he goes along. He usually gives a little serman in the middle of it all, which is generally very charismatic and funny. He’s a real charecter — and reminds me of [Comedy actor] Gene Wilder.”

Charlotte’s best friend Naomi Holland, whom she has known since she was five, was chosen as Dexter’s godmother, and executive producer Nick Fiveash, who has known her since she was 14, was godfather.

“I was going to ask my friend Kyla to be godmother as well, but she just had a baby herself and I didn’t want to put too much responsibility on her. We’ve chosen people who are going to play a big part in Dexter’s life anyway and guide him on his spiritual path.”

When he arrived for the church service, little Dexter looked super cute in linen shorts and baby socks with crosses on them — from childrens wear company Little Darlings. Meanwhile, Ruby, who turned up clutching her favourite blue elephant, looked like a princess in a white satin dress, which was also from Little Darlings, and was dotted with diamante.

Just before the party kicked off, proud parents Charlotte and Gavin sat down with Hello! for a chat about the day so far, what was in store next and their future plans.

To read the interview and to see additional pictures click END_OF_DOCUMENT_TOKEN_TO_BE_REPLACED