Big Brother 1 winner Craig Phillips and wife Laura feature in the latest edition of OK! magazine and introduce their beautiful baby boy Lennon Thomas. He was born  in Liverpool at 5:41am on December 16th. He  weighed 6lbs, 10.5oz, and joins big sister Nelly Janet, 22 months. Together the pair talk about choosing their little boy’s name, being a family of four, the lack of sleep now that they have two children under 2 and much more 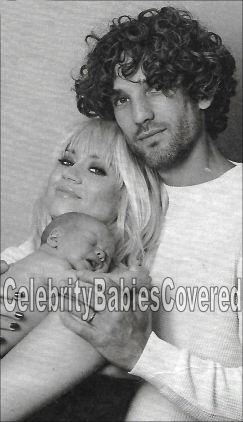 Australian ballet dancer Steven McRae and wife Elizabeth Harrod introduce their newborn son Rupert George in this week’s Hello! magazine. Baby Rupert was born at 1.45pm at the Kingston hospital in London on August 31st 2019 and joins older siblings Audrey Bluebell, 4 and Frederick Charles, 3 next month. Inside the pair –who are also both members of the Royal Ballet School in London — talk about life as a family of three, how well Audrey and Fredrick have adapted to their new brother and weather they have plans for any more children.

Actress Gemma Atkinson appears in the latest edition of Hello! Magazine and talks all about being mum to daughter Mia Louise, almost 4 months and whether there are more babies on the horizon with her Spanish boyfriend Gorka Marquez. 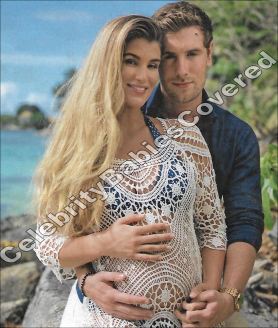 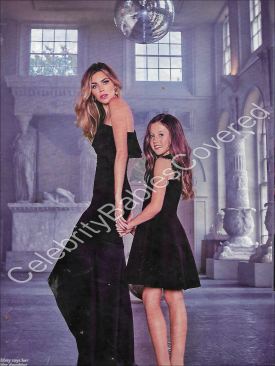 Model Abbey Clancy features as the cover star in a recent edition of OK! magazine with oldest daughter Sophia Ruby. Eight year old Sophia is already following in her mum’s modelling footsteps as they’ve joined forces to become the faces of a selection of party wear for Lipsy. Inside the 33 year-old talks all about being a mum of four and the lack of sleep, what children Sophia, Liberty Rose, 4 and Johnny 21 months, think of their new baby brother Jack, 4 months and why Christmas with her children and husband Peter Crouch is extra special this year.

Former The Only Way is Essex cast member Mario Falcone and fiancé Becky Miesner feature in the recent issue of New! Magazine with their adorable baby boy Parker Jax, 11 months. Together they talk about parenthood, weather more children are in the pipeline and why Mario has informed pals not to contact him between the months of June, July and August 2020.

Teen Mom OG‘s Cory Wharton and girlfriend Taylor Selfridge are expecting their first child together in April 2020. Choosing USA weekly to break their happy news as well as his personal Instagram, Cory — who is also dad to daughter Ryder K, 2 with Cheyenne Floyd –revealed that baby on the way wasn’t planned but sometimes God has other plans:

“I wanted you guys to know that we weren’t trying for a baby right now but sometimes God puts some things in to your life that you don’t really understand at the time but it always turns out to be a bigger blessing.

“I’m really excited to share this journey with you guys. All that I ask from you guys is respect for Taylor, respect for me and most importantly respect for the baby.

“All that I want is a healthy baby that is brought in to a very positive environment and surrounded by good energy and love. The same way I am raising Ryder. 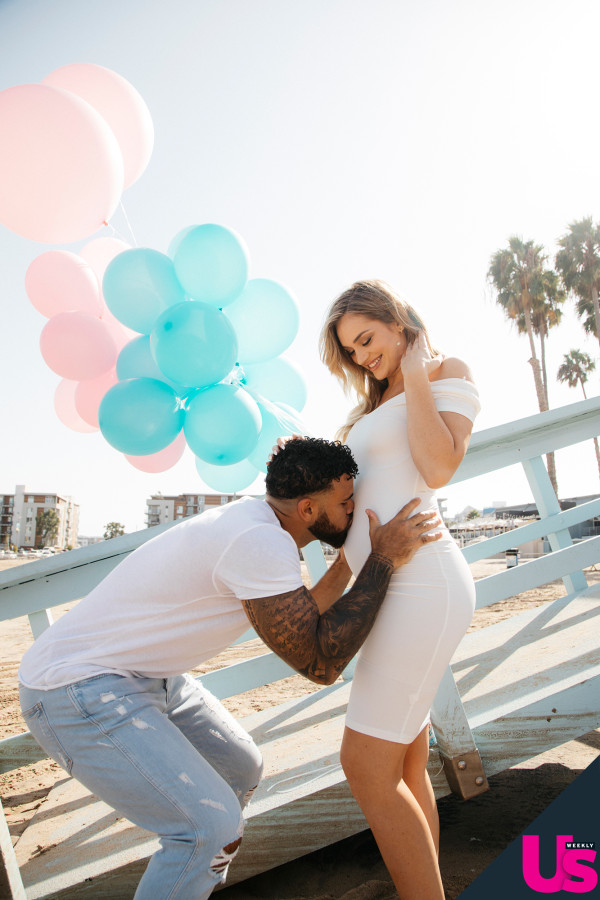 Actor James Bye who plays Martin Fowler in EastEnders features in a recent edition of OK! magazine with his pregnant wife Victoria and their two year old son Edward. Inside he discusses his excitement about his impending arrival — a second son — who is due on February 28th and life with his young family.

To read all about Yves delivery, choosing his name, how Samia’s daughter Freya feels about her little brother and to see additional photos please click END_OF_DOCUMENT_TOKEN_TO_BE_REPLACED 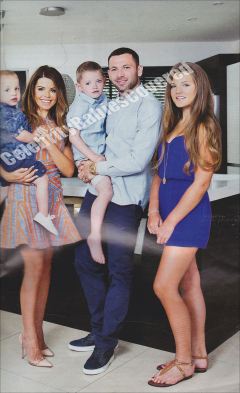 The Real Housewives of Cheshire‘s Tanya Bardsley and her footballer husband Phil feature in a recent issue of OK! magazine and spoke a little about life at home with their three children Gabriella, 13, Rocco, 6, and Renz, 2.

Elle magazine Australia has come under fire from critics for playing down the June issue which features model Nicole Trunfio breastfeeding her son Zion Rain, 4 months. However, it’s not the fact that she’s breastfeeding that’s caused the uproar — it’s that the cover in question is only available for subscribers of the magazine. In all store copies the supermodel is on the front cover in a different shot holding her little boy.

Critics say having two separate issues and not making the one showing her breastfeeding exclusively available for everyone to buy is sending out a completely negative attitude towards something that’s so natural. Many readers have also commented via Elle‘s Facebook page expressing their disgust about the issue not being readily available.

However, Editor-In-Chief of Elle, Justine Cullen says that that particular shot wasn’t actually planned and was just a bonus picture for loyal subscribers.

‘This wasn’t a contrived situation: Zion needed a feed, Nicole gave it to him, and when we saw how beautiful they looked we simply moved her onto the set. It was a completely natural moment that resulted in a powerful picture.”

To see the cover that’s hit newsstands, other photos from the shoot and to read about what Nicole thinks of the front cover please END_OF_DOCUMENT_TOKEN_TO_BE_REPLACED

To read about Sage’s 22-hour birth, picking her name and how she’s changed Samantha’s life — and to see additional photos please click END_OF_DOCUMENT_TOKEN_TO_BE_REPLACED

Natalie Pinkham and husband Owain Walbyoff feature in a recent issue of Hello! magazine and introduce their beautiful baby boy Wilfred “Wilf” Otto, 3 months. Howver, unlike the usual introductions — Natalie’s story focuses mostly on the horrendous birth she had while delivering her son back in January. Until recently the star has been too scared to speak out about what unfolded. However, it was only whilst speaking to a professional, who suggested it may help her come to terms with what happened has she decided to tell her story. She hopes that by opening up about her ordeal it may help others who are or have gone through something similar.

When you find out you’re pregnant you start to plan out your birthing plan — do you want a home birth? water birth? Pain relief? However, no matter how much you map it all out — sometimes the experience can be a thousand worlds apart from what you expect or want. When singer Kimberley Walsh gave birth to son Bobby Jay on September 4th 2014, her delivery was also one that wasn’t as straight forward as she’d envisioned. Speaking to Mother & Baby magazine, she said:

I opted for an epidural before he was born. It would have been absolutely horrific without one.

Bobby turned at the last minute making it virtually impossible to push him out. If I had panicked I would have ended up with a C-section and it was very touch and go.

The doctors had to use forceps to move his head down and when he came out his face was looking up at us!

Continue reading to see an additional photo and find out about Kimberley’s difficulties with breastfeeding and how she’s not stressed out about getting her pre-pregnancy body back.
END_OF_DOCUMENT_TOKEN_TO_BE_REPLACED

END_OF_DOCUMENT_TOKEN_TO_BE_REPLACED

Actors Alan Halsall and wife Lucy-Jo Hudson are the cover stars and feature in a recent edition of OK! magazine with daughter Sienna-Rae, 19 months. Inside they talk all about life as parents, little Sienna’s growing personality and how she recognises her dad when she sees him on TV

To read the interview and to see additional photos please END_OF_DOCUMENT_TOKEN_TO_BE_REPLACED

TV presenter and actress Amanda Holden appears in the June issues of Good Housekeeping magazine and has revealed that she’s “not allowed” to have another child – even if she wanted to. Already mum to daughters Alexa Louise Florence, 9 and Hollie Rose, 3, with husband Chris Hughes, the star has often spoken about her complicated pregnancies – including the stillborn birth of her son Theo in 2011 when she was 7 months along.

“I would be dead the next time. And I think Chris would say you can have them but you’re not having them with me.

“I’ve got the two I’m supposed to have. I just had to complete my family to feel like I could be me.”

To read all about baby Freja’s birth, picking her name and how they’re finding parenthood click END_OF_DOCUMENT_TOKEN_TO_BE_REPLACED