American reality TV ‘s Michelle and Jim-Bob Duggar have just received a very special gift — their first grandchild. The pair became grandparents after their son Joshua and wife Anna welcomed their first child — baby daughter Mackynzie Renee. She was born at home with both a midwife and a doula present on Thursday, October 8th and weighed 8lbs.

Michelle and Jim-Bob are about to become parents again themselves in March 2010 — to baby number 19. 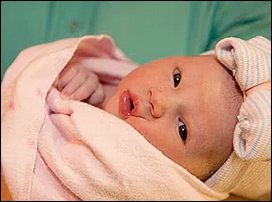