Actress Jo Joyner and husband Neil Madden introduce their miracle twins — son Freddie and daughter Edie in this week’s OK! magazine while at home in the Cotswolds. The new mum had to undergo a Caesarean section 6 weeks ago to give birth to 6lbs 11oz Freddie and 5lbs 11oz, Edie.

On how Jo is healing from her caesarean:

Jo: I had a great surgeon and it was very neat and I wasn’t too messed about with inside. When you’ve got twins you’re so busy you don’t think about the pain or soreness. Your stomach muscles aren’t what they used to be and lifting two babies takes its toll. With twins, you don’t have time to think.

On bonding with the twins:

J: It was weird because three weeks after we had them we were in such a blur. I hadn’t slept. We worked out, no word of a lie, that in the first week I’d slept for ten and a half hours. Somehow you’re still functioning. By the third week, it felt so surreal. I felt as if someone had come up and said: ‘Hello, I’ve come to pick up the babies. Thank you for doing the three-week challenge, you’ve passed.’I’d have gone: ‘Alright!’ I didn’t believe they were mine. I thought it was odd that all this had happened. I still don’t quite believe they’re ours. But I haven’t thought about the bonding thing — for me it was instant. I just can’t believe it. We are blessed. I keep thinking: ‘I can’t believe I made you. I must kiss you!’ 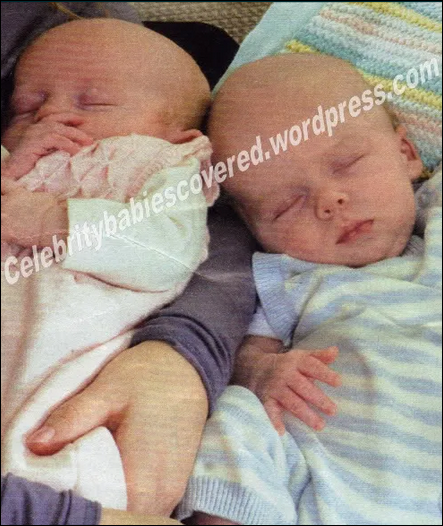 On having a boy and a girl:

J: Since the last interview so many people said it was going to be a boy and a girl and I thought, could we really be that lucky? But I did always think it would be.

Neil: I always thought it’d be a boy and a girl

J: On the day, we were so relieved that they were fit and well, I didn’t think about it. But a few weeks later we were lying in bed with them both on us, and I thought, oh my God, we’ve got a boy and a girl. On picking their names:

N: We were watching the Edith Piaf film with Marion Cotillard, La Vie En Rose, and I said to Jo: ‘Edith is a lovely name.’

J: Then I said I loved the name Edie because I had an Auntie Edie. Frederick is my grandfather and great-grandfather, a family name. His middle name is McCormick, my mum’s maiden name. Her brother didn’t have children so we wanted to keep the name going. 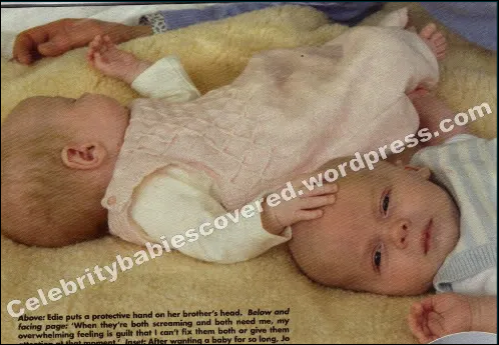 On if the twins have started to interact with each other:

J: Freddie doesn’t feel Edie. If she’s screaming it doesn’t wake him and he doesn’t care. But if Freddie’s crying it will unsettle her and she is sensitive to him. If Freddie is about to be sick or has a stomach pain, just a second before Edie will have a squirm as if she knew it was going to happen. Edie’s in tune with him, but he’s a typical bloke, bless him! 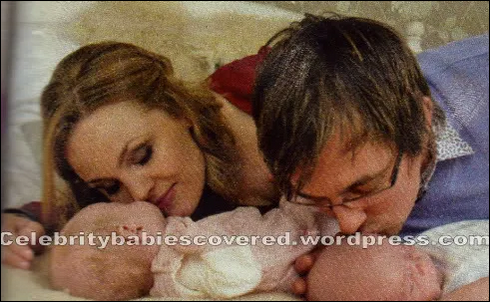 On giving the twins a routine:

J: This week they’ve got a lot better — but they’re tiny and just need to feed. If you’ve got any baby under 7 or 8lbs when it’s born. You’ve just got to feed on demand and fatten them up. These books say: When they’re 2 weeks old…when they’re 4 weeks old…’ but they’re still tiny and need to eat, I thought, who is this routine for? I’ve got six months maternity leave and I want to dedicate that time to them. There needs to be a routine, but it doesn’t have to fit me. It’s better to see what routine they’ve got. They have little patterns — in the morning they like to lie on the bed while I get dressed and potter about listening to Norah Jones.

N: Or the Jeremy Kyle Show!

J: With twins, it’s all about the syncing. If there’s two of you about it’s really nice, but if they’re in sync and you’re on your own, you’re stuck because you’re trying to feed the two of them at the same time, which is fine. But winding them both at once is impossible because you’ve only got one pair of arms — 43 minutes out of sync is perfect, like now for instance, Edie’s asleep and Freddie’s having his feed. After he’s winded, Edie should be ready for her feed, so that’s perfect. When they’re both down, you’ve got about an hour so you can sleep. We look at each other at 4am and think, one baby would be a piece of cake! 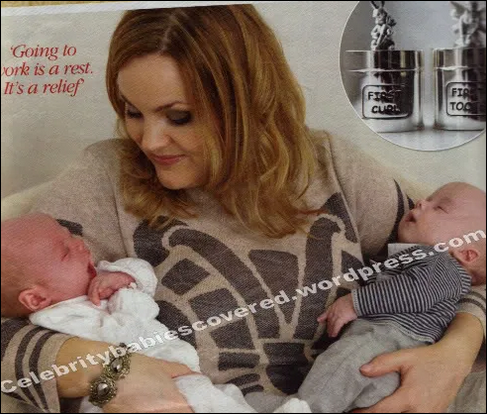 On the sleepless nights:

N: The first two nights we were both up until 8am. I was standing by the fireplace holding two Moses baskets, swinging them and thinking: ‘Be quiet.’ I’m usually very calm. I expected you to be more…

J: I’m impatient with my career, and I thought I would be with the babies, but it’s only in that area. We’ve swapped, haven’t we?

N: I need to calm it down. Now we have this system it’s so much easier. But the sleep deprivation is terrible.

J: It was like being hit by a train, the tiredness and stress of everything. On the techniques they’ve tried with the babies to try and get extra sleep:

J: We tried single parenting in the early days — he’d have one downstairs and I’d have the other one upstairs. But he always seemed to get the easy one and I’d get the one with colic. We’d meet in the kitchen and I’d say: ‘How was your evening?’ and he’d say: ‘Fine. Had a feed, had a fart, went to sleep.’

J: With this shift work you have to say to each other: ‘I’ll see you in a year.’ I go to bed at 9pm and Neil brings them in at 1am and sleeps in the spare room. That way we both get at least 4 hours. Then we meet for breakfast at 6am in the kitchen and catch up about the previous night. J: My mum has been amazing, coming round and saying: ‘Right you two, get some sleep. I’ll stay up with the babies until 7am. She’s an insomniac, she says: ‘Well, I was up the road thinking: ‘I can’t sleep.’ 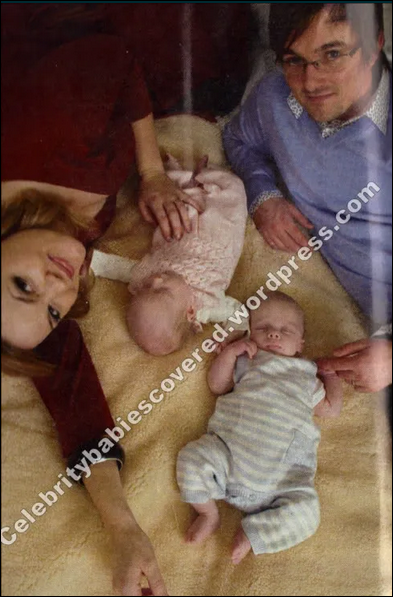 On Neil going back to work:

N: I find that going to work is a rest. You go to work and it’s a relief. Jo left me alone with them for the first time and they were in sync. It was only an hour and a half but they were both screaming.

J: When I came in I said: ‘You look like me when you come home from work at five o’clock!’ You get stuck in one position on the sofa, holding them both. You can’t move because it’s the only way they’re comfortable! I’ll say to him: ‘I’ve been in this position for an hour and a half!’ J: And I see my mum in Edie, but we see neither of ourselves in them! Fred has got my dad’s hands.

On the advice they’d give to others who are expecting twins:

N: A couple of weeks before you have the babies, go round the house and do as many jobs as you can with one arm.

J: We chop each other’s dinners up and we eat one-handed! On if Jo finds it scary because she’s a mum of two small babies and is outnumbered:

J: I think more than finding it scary I feel sorry for them, because they didn’t choose to be twins and they didn’t choose to share me. When they’re both screaming and both need me, my overwhelming feeling is guilt, that I can’t fix them both, or give them attention at that moment. But any mother of two can say that.

On if Jo would still  like a third child, as she once said in a previous interview before the twins came along:

J: Did I? Well, we weren’t trying to cope with two then!

N: I think we should see how it goes with these two first. But no, not in the near future! 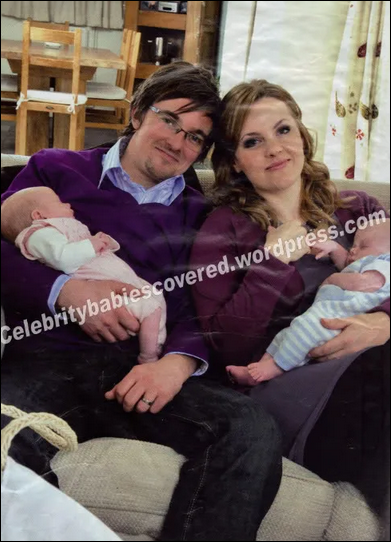