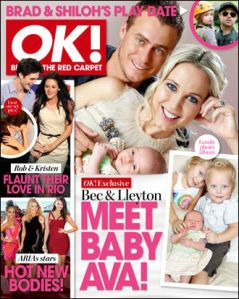 Bec and Lleyton Hewitt are the cover stars of OK! Australia and introduce their third child and second daughter Ava Sydney Hewitt who was born on October 19th — at five weeks early and weighed 5lbs 7oz.

Bec: No [I didn’t expect her to arrive early] And Lleyton wasn’t actually here.He was in Melbourne.

Lleyton: But I got there! 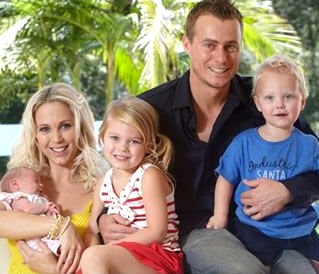 On the worry because she was premature:

B: She seemed well and she was able to feed straight away. She is classed as a premature baby, so they definitely made a really big fuss about it in the hospital. Before every feed, they took her blood sugar levels and also wrapped her up so much that I thought she was too hot. But they said premmie babies use too much energy if they get cold.

L: As soon as she came out, everything seemed fine to me — just like with the other two. The difference is she sleeps a lot more because [premmie babies] need to catch up on the growing they do in the womb.

B: It’s made adjusting to three a lot easier — with all the sleep we’re getting!