Singer Rachel Stevens and husband Alex Bourne introduce their gorgeous baby daughter Amelie, 8 weeks, in the recent issue of OK! magazine. Inside they both talk about Rachel’s labour, picking Amelie’s name and what life is like as a family of three.

On opting for a delivery surprise:

Rachel: It was lovely to have the surprise but I did have a feeling that I was having a girl and at my baby shower we did the ring test where you put your wedding ring on a thread and you see which way it twists and it was right. Funnily enough I went in to labour the night after the baby shower, exactly a week early. 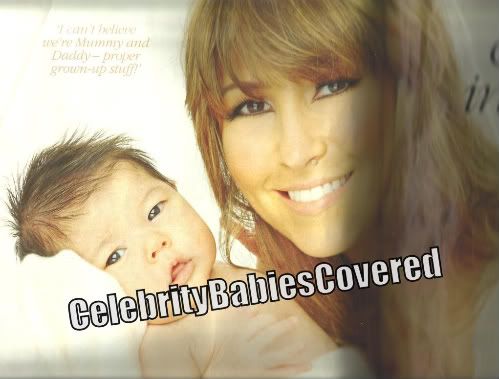 R: I was at my mother-in-law’s house having hot flushes and at 4:15am I couldn’t sleep. I think subconciously I knew I was going in to labour, then I got my first contractions. People say you just know but I actually didn’t at that time. They kept coming then I started to realise that this was it. I woke Alex up and he didn’t quite believe it.

Alex: I didn’t want to get myself over-excited and for it to be a false alarm. I used an app on my iPhone which I can’t reccomend enough for expectand fathers — it times the contractions and records the history. It sounds so geeky now but for all the control freaks out there it’s amazing!

R: Alex is a trained massage therapist so that helped after every contraction, and he got me a big ball from a yoga centre down the road.

A: I ran in and said: ‘My wife’s having a baby!’ It was a godsend. Rachel said that day was the best day of her life. Funnily enough it was one of the calmest days we’ve spent together. We remained as relaxed as possible and we had a really nice time together.

R: Alex cooked lunch and we went for a walk in Regent Park and got bombarded 200 school children. Every five to ten minutes I’d have a contraction.

A: Typically, we got in the car [and] on the way to the hospital it started conking out. It was one of those scary moments where you have to laugh. Once we got to the hospital [we realised] the delivery suite was on the seventh floor [and] Rachel has a phobia of lifts. Watching it on TV, you think you have these crazy contractions then rush to hospital and have a baby, but it’s such a long process. 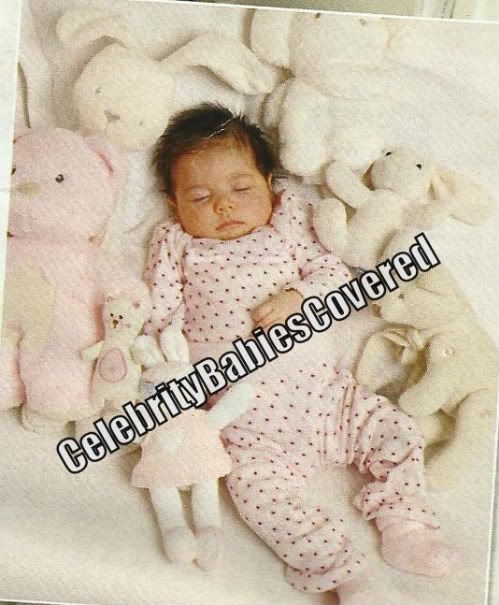 On if Rachel’s pain relief:

A: [There was no] screaming but I did have indents all over my hands from her nails. I have so much respect for Rachel. She handled it better than I ever thought she would. I was so proud of her.

R: He made me a CD of my favourite songs and massaged me the whole time. I wanted it to be as natural as possible and to have lovely music and lotions and potions. You can only plan so much and you have to let nature take its course. I had the epidural on standby. I got to 7cm and the contraction was so painful.

A: Eventually Rachel had an epidural — before I wasn’t sure how I felt about epidurals, but she’d given so much and had nothing left in her and I could see she needed some extra help. It’s hard to watch your wife have an epidural. But the hospital was amazing, she was in good hands. The whole process was so natural. I was waiting for the bit where she effed and blinded at me like the girl from The Exorcist but it never came! 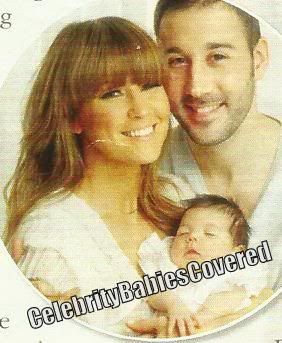 On meeting Amelie for the first time:

R: It’s hard to put into words. She came straight on to my chest to do the skin-to-skin thing. At first I thought she was a little boy but it was a girl and I burst in to tears.

R: Whatever I had would’ve been amazing but I got my little girl.

On if Alex cried:

A: I cut the umbilical cord but I didn’t shed a tear and actually Amelie didn’t cry either. I thought I might do but it was very serene and calm. On Rachel once telling Alex he was to stay at the top end when she was giving birth:

R: I know, but by that point I really didn’t care!

A: When do you ever get to see a baby being born? You have to see it!

R: We had a couple of girls’ names and was always the one I really loved. When she was born it was a no-brainer that she was an Amelie. We’re still debating weather to give her a [middle name]. We’ve got a year to decide on the birth certificate. The only other name we love, we might want to give to another daughter someday. She can always give herself a middle name if she wants one. 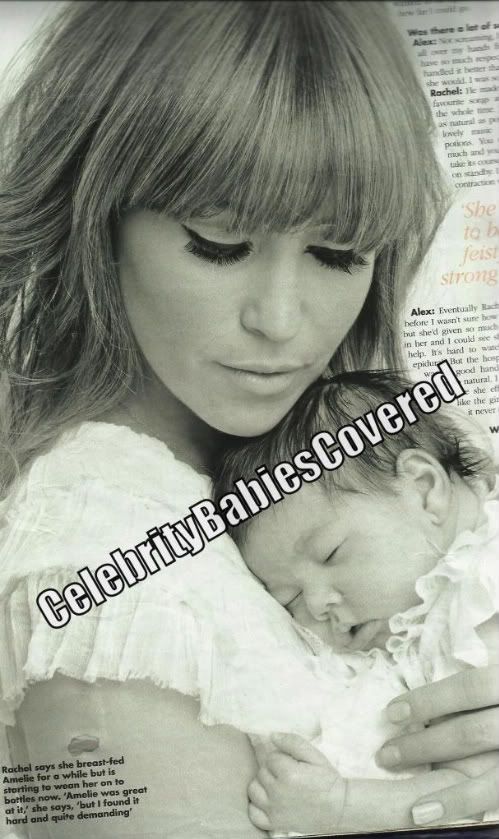 R: It’s a big adjustment, such a life changing thing, but it’s so amazing. The love you feel is incredible. The whole experience is overwhelming and I can’t believe we’re Mummy and Daddy — proper grown-up stuff!

On how Amelie is doing:

R: She’s started to smile now and she’s just gorgeous. She’s a good baby too, we’re just so lucky. She’s gentle, but she’s going to be quite fiesty and strong-willed, I think.

A: She’s a big smiler. I fed her tonight and she wouldn’t take the last bit and she looked at me smiling. She’s cheeky. I know we’re biased but we’re very lucky, she only cries when she’s hungry. On if Rachel is breast or bottle feeding:

R: I breast-fed but I’m starting to wean her onto the bottle more now. Amelie was great at it but I found it hard and quite demanding.

A: The first day that Rachel came out I was quite surprised…

R: Oh my God it was literally like I’d had a boob job overnight! It’s amazing.

On if they’ve had any help:

R: We’ve had a little bit of help from a maternity nurse which has been fantastic. It’s so true when people say they wish a baby came with instructions because it’s so overwhelming and you just want to do the best you can. There’s so much to learn and you have hormones everywhere. On Rachel wanting to lose the baby weight:

R: I just want to be healthy. I want to get into shape so I’m looking forward to getting back out training. I exercised right up until the last week. I’ve put on weight but not masses. I was lucky.

On Alex being a protective dad:

A: As long as Amelie stays in babygros and doesn’t go out the house she’ll be fine!

R: Definately! But not yet! Alex would like a football team. You never know how you’re going to feel but I think I’d love two or three.