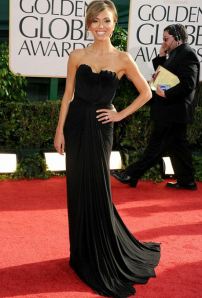 Giuliana Rancic says she is fed up of people saying that the reason she is unable to conceive a child is due to her being skinny. Hitting back at those ‘ignorant people,’ she said:

The host of E! also admits that at first she blamed herself for her fertility issues but now realizes that’s not the case.

‘As a woman, you blame your body, you blame yourself, and I was riding that wave for a while and I was playing the blame game. ‘Not for anything I was doing day to day, but (I wondered): Should [husband] Bill have married someone younger? Did I wait too long? Should I have had kids at a younger age?

‘[But] that’s not what God wanted. The fact that I really do feel happier than I’ve felt in years, I feel like it really was part of a bigger plan, and I don’t know what that plan is but whatever it is, we’re fine with it.’

For now, the pair are taking a break from fertility treatments and are concentrating on their relationship.

‘We’re on a bit of a time out. I’m not going to kid you, it’s kind of going well. We’re loving it. This break, which has only been a few months, was so incredibly necessary after two years of shots and being a lab rat and going in and out of doctors’ offices and mood swings. ‘I forgot what it was like to feel normal.”