Actor Robert Downey Jnr became a father for the third time to daughter Avri Roel on November 4th 2014 and on Thursday, April 23rd he gave the world a glimpse of his little princess on The Late Show. Talking to show host David Letterman he said:

“I thought I’d show the first picture on planet earth here with you, kind sir.”

During his time on the show, he also revealed that son Exton Elias, 3, is already trying to show his little sister who’s the boss but as of yet there is no sibling rivalry between the pair.

“It’s natural for Exton to want to bite her once in a while. It can start off as a little pet and then it turns into a nibble. I think it’s just establishing dominance. She’ll be running stuff at some point.”

You can catch Robert Downey Jnr in cinemas worldwide as he reprises the character role of Iron Man for Avengers: Age Of Ultron. 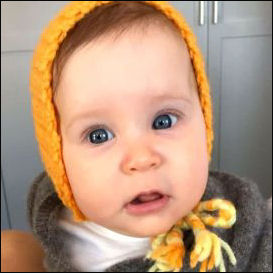