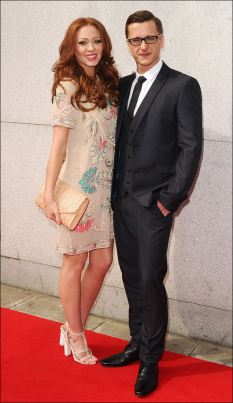 When singer Ritchie Neville planned to ask fiancée Natasha Hamilton to marry him on a recent trip to Rome, not only did he ask her dad for permission but he also bypassed it with her 13-year-old son Josh.

“I told Josh, he was pretty excited. We were sat on the sofa and it was just me and him a couple of weeks before and I said: “If I tell you something, can you keep a secret? He was like: ‘Of course I can, mate. I told him and he said: “Yeah that’s cool.’ It was a typical teenage response.”

Aside from Josh and their daughter Ella Rose, 13 months, both he and Natasha had to let Natasha’s two other sons Harry, 10, and Alfie Riad, 5, in on the exciting news.

Natasha: We told them the day we got home and they were made up. Alfie kept saying: ‘Can I try your ring on, Mummy? It’s very pretty.

Ritchie: Harry’s face was a picture. He gasped and had the biggest smile! I won’t ever forget that moment.

N: I’m their mum, so if they see me happy, they’re happy. We have been through a lot as a family so it’s just about showing them how much you love and care for them. They absolutely adore Ritch. Alfie actually said to me: ‘How many times do you get married, Mummy?’ And I said: ‘Well your supposed to do it once, but sometimes it doesn’t work out like that, but Mummy and Ritch are going to get married and that’s it, we’re stuck with each other forever.

And although the marriage will make Ritchie officially the boys’ stepdad and make things more solidified, it is a role he already sees himself in.

“I already feel like I am, but I do think it solidifies it in some way. I think kids understand marriage so it makes it very much permanent, not that it isn’t anyway. The whole point of a wedding is to give all of yourself and say until I leave this earth, I will be with you.”