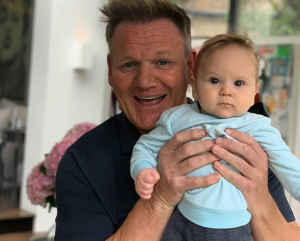 During a recent appearance on the Johnathon Ross Show Gordon Ramsey revealed that despite being a dad to five with wife Tana, he has only been present for one of those births – that of his youngest child and son Oscar James, 6 months.

“Tana didn’t want to see me there for previous births, she said ‘I don’t want you to see me in this state so get out.’ This time around, I was there and I absolutely shit my pants.”

While revisiting the birth with host Johnathon Ross, the TV chef also revealed that seeing little Oscar’s birth wasn’t one of the only firsts to happen to him – he also fainted!

“I fainted. I literally dropped on the floor. I was sat there and Oscar popped out through the sunroof and then they sort of throw you on him and he’s screaming and I fell back, the nurse grabbed me.

Have you ever been in the [operating] theatre where there is so much commotion, so much going on? And then bang. I’ve never fainted in my life, by the way, that was the first time.”

The 52 year old also gushed about what life was like having a child later life despite his other four children — Megan, 21,  twins Jack and Holly, 19, and Matilda, 17, all pretty much grown up.

“He is six months, it’s extraordinary, also for the rest of the kids it’s just a welcome bundle of joy. And boy, does that take you back!”