On having a Cesarean-Section birth:

Kimberly: My first two babies were breech so I had to have Cesareans. Senna wasn’t breech, but as I’d had two I was advised not to give birth naturally. I had always hoped for a natural birth and it’s hard to have that choice taken away, but I accepted it. The best is knowing it was happening, so we got there at 11am on Friday and he was out by 1:59pm, and by Sunday morning we were in the Mcdonald’s drive-through!

Max: I’d love for Kim to have delivered naturally as it’s what she wanted, but from a husband’s point of view it was great as we could book it in around the traffic. People question my priorities, but why would you want to sit in traffic on the day your child is born? On being in the operating theatre during the birth:

M: There is nothing for us guys to do, but at the same time there is everything. You’re a DJ, counsellor, camera crew and you’re there to hold things.

K: He gave me his hand when it got overwhelming, and played our favourite song — To Build A Home by The Cinematic Orchestra — that I walked down the aisle to. For the first time, they put the sheet down a bit so I could see it happening, which was really special as I hadn’t had that option before. I thought he was so beautiful and so big.

M: As he wasn’t breech. it was a different experience because we saw him come up head first. On the other two births, it was like: ‘What is that? Have you been cooking ham?! On how Kimberly is recovering from the Cesarean-Section:

K: [It’s] brutal! I’m a dancer so the toll it takes being cut in that way is hard. We have the most comfortable bed in the world, but I can’t get out of it as I don’t have any core strength, so I’ve had to sleep on the sofa. Max has been helping me — he does Pilates classes in the lounge.

M: I’m a fitness coach, and I got my pre and postnatal qualifications when we fell pregnant. She wants to be able to dance again, but with regards to how she looks, that just doesn’t matter. I won’t let anybody measure or weigh her because it’s totally irrelevant.

On finding out they were having a boy after having two girls:

K: We were so happy! We knew we were only going to have three children, so this was the last chance. For me, it was the most celebrated little penis I’ve ever had. 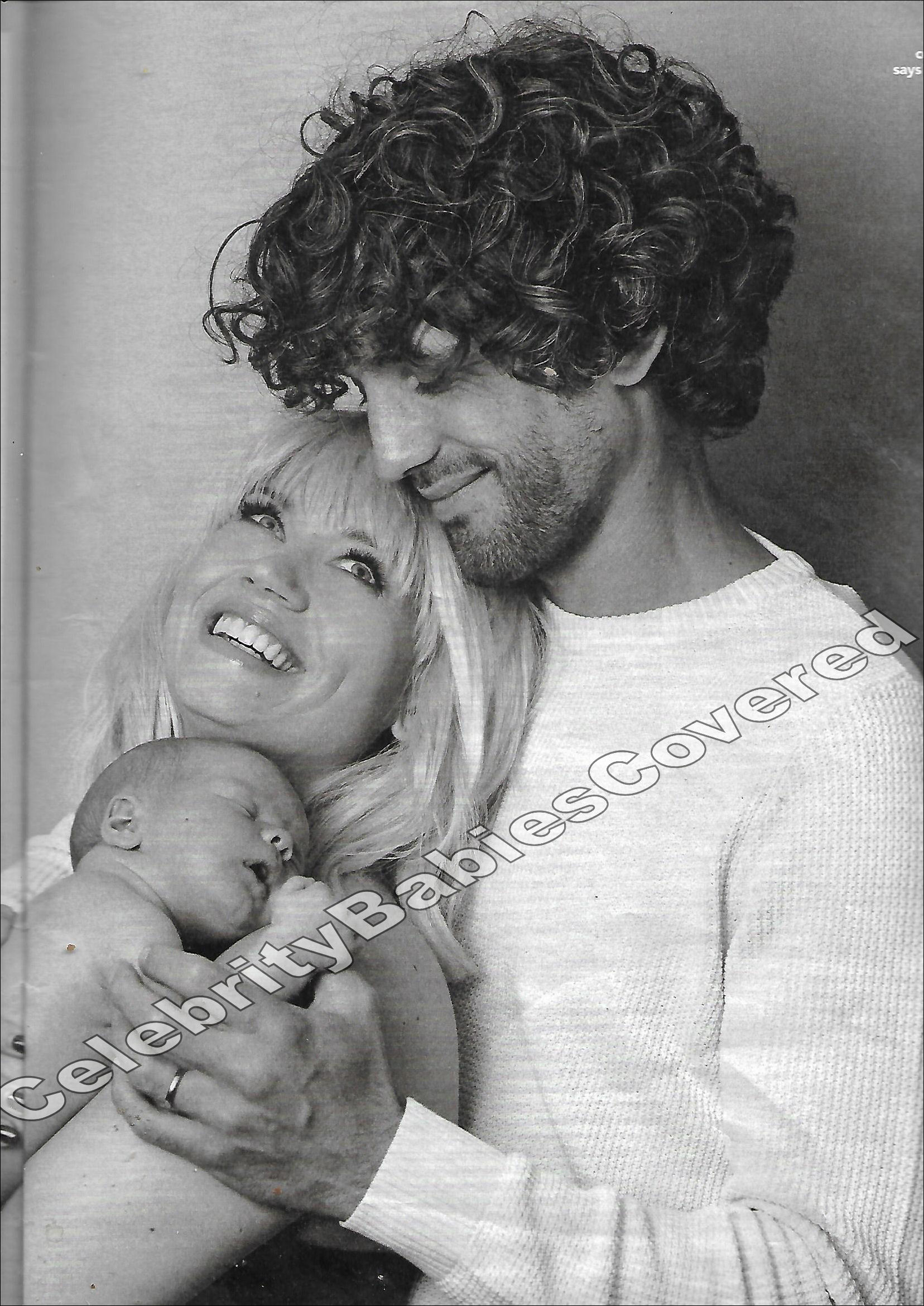 M: I’ve always wanted the name Ford because my big career break was getting the cover of GQ with Tom Ford. Then my dad was a racing car driver, and so his middle name is Senna after Formula 1 driver Ayrton Senna.

K: We had it chosen since before we were married. One sad thing about not having a boy would be we’d never get to use the name.

On how involved Willow and Maple were with the pregnancy and how they’ve adjusted to having a baby brother:

M: They’ve been heavily involved. They had their own little babies to carry around and they’ve been stuffing them up their tops. I came home one night and Willow was sat up with all the pillows around her like she was in a hospital bed, and she was cradling a doll. I thought.” you’ve actually nailed it!”

K: We bought them presents to bring Senna. and had also got them some back which was special. They love him so much! It’s the most exciting thing for them. As soon as they get up its: ‘Where’s baby Senna?’ On Senna’s sleep pattern and breastfeeding:

K: He is sleeping much better than the start, we can go three hours between feeds. I have an app that measures everything — sleep, poo, wee, which boob he’s on, everything! I managed to go two months breastfeeding with the first, and then six months with the second — I felt like a rock star. We’re going to start the Gina Ford programme soon to get him into a schedule. We’re not quite as strict and I know a lot of people hate the book, but it worked really well with the first two. On becoming a family of five:

K: It’s mental at the minute, with breastfeeding and my healing, but it feels right. We feel complete.

M: It feels like we’re supposed to have three children, but come back in a few years and see what I say [laughs].

On how Senna has slotted into the hustle and bustle of family life:

K: He is fitting into our lives, rather than us entering the baby bubble like I have done with the other two. On if any celebrity pals have been to visit Senna:

M: Ashley [Roberts] was the first to visit Senna at the hospital. She came straight from L.A. so she was jet-lagged. It was nice that she made the effort, as by the third baby people don’t bother so much. Willow had queues around the block., and now people are like: ‘Oh, you’ve had another one?’ Abbey [Clancy] is going to pop in this week.

On if they’re certain they’ll only ever have three children:

K: I had my tubes clamped the same time as having Senna.

M: I’m having a vasectomy too — we’re not taking any chances. I’m sure we’re going to be together forever, but if we did split for whatever reason then Kim couldn’t have kids with somebody else, so I shouldn’t be able to either.