They may have parted ways romantically in 2018 but there is no animosity between One Direction‘s Liam Payne and ex-girlfriend Cheryl Tweedy. While appearing on the Johnathon Ross show the boy band star couldn’t help but praise his ‘awesome,’ ex who is a ‘fantastic,’ mum to their son Bear, 2, and is completely understanding when it comes to his career.

She doesn’t get on to me when I’m out working, doing different things, she understands, we do the very same job so it’s not that different for us but yeah, she’s awesome.

The 26 year-old singer recently admitted that his touring schedule can often make it hard for him to spend time with his son but when they are together they just love to ‘hang out.’

He comes over to my house every so often and we just hang out. He is literally the most easy going child.

I think you put pressure on yourself as a dad sometimes, especially it’s hard to connect with a two year-old, they will laugh at anything.

But while he may only be the tender age of two, Bear has already discovered rap music and the word ‘Sushi,’ something his dad didn’t try until he was 22 years of age.

He came in to the house and I was eating sushi and he sat on my lap, looked at the table of sushi, took out his dummy [pacifier] and went “Mmm sushis.” I didn’t know what sushi was until I was 22!

He had a real rap phase where he was really buzzing off listening to [rap]…When we put rap music on he’d be up [dancing]. 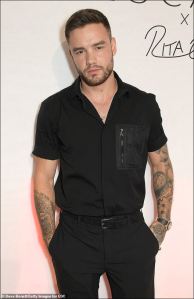 While he is thankful to have a career in music, One Direction‘s Liam Payne says it’s a tale of a doubled edged sword because he can often go weeks without seeing his 2 year old son Bear. who he shares with ex-girlfriend Cheryl Cole. Speaking on BBC’s One Show on Friday, October 18th, he said:

“Loads of random things happen with kids all the time. Like if he’s not very well, sometimes you miss dates and things. Then a couple of weeks go by, and I haven’t seen him in ages.”

The star, 26, is currently on a promotional tour and admits that he’s going to have to try and work out a schedule that’ll work around him being able to see his son.

‘It is difficult being on the road, going out and promo-ing. It has been hard to get home and see him. It hurts, it’s horrible, I do want to go out on tour, I’m just going to have to figure out the schedule properly.”

Source: The One Show  Photo: Getty