GMTV weathergirl Clare Nasir appears in New magazine with her gorgeous baby daughter Sienna Clare, 9 weeks, and talks about what a miracle her little girl is. She married husband Chris Hawkins in 2005 and the pair soon got started on trying for a family. But after numerous disappointments and failed fertility treatment, the pair finally got what they wished for last year when Clare found out she was expecting.

Sienna was born 7 weeks early on November 11th 2009 after a very difficult pregnancy. After spending five weeks in the special care baby unit at University College Hospital in London she was finally able to go home with her proud parents at Christmas.

On when they decided to start trying for a baby:

Clare: I came off the pill before we were even married. It was soon obvious there were going to be problems. After two years I had an operation to clear out the tumours in my womb. Then we tried again for another year, but nothing happened, so we tried fertility treatment. We had three lots of failed IUI [where the man’s sperm is injected into the uterus] and then two lots of IVF.

C: Horrible. You feel like a vessel. You’re injecting drugs in to your system every day, you’re going for blood tests three times a week and you feel premenstrual at all times. It’s very clinical and you lose the romance of your relationship for a while.

On if it was difficult seeing other people getting pregnant:

C: All my friends were getting pregnant at a similar time but I happy for them. I know Kate [Garroway] was worried about telling me she was pregnant with Billy. She was the first person I told when I found out my first lot of IVF had failed. I’d just come off air and I was hysterical. She just held me.

On when she discovered she was finally expecting:

C: After the second lot of IVF, I couldn’t wait for my period so I did a pregnancy test. I thought, ‘If this doesn’t work, I’m going down the pub,’ I was at my wits’ end. I’d even applied for adoption papers. When it was positive, I couldn’t believe it. I was with Chris and we were just staring at it.

On her difficult pregnancy:

C: At ten weeks Kate took me to Champney’s for a spa day and I started bleeding. I thought I’d lost the baby. I took myself to A&E [accident and emergency] and the feeling of relief when I saw the heartbeat was incredible. I was bleeding for another five weeks and then I started to feel better and had two brilliant months. I felt energised and was really glowing.

At 25 weeks, my waters broke. I initially thought I had a bladder problem – I called NHS Direct and they told me to get to hospital straight away because it sounded like I was in labour. Doctors said it was too early for the baby to come. The chances of my baby surviving then were only 57 percent and the risks of brain damage was 80 percent. So I just had to stay very still. I was in the hospital for two weeks and then went home to rest. I spent seven weeks being tormented by the thought that anything could happen. I think it’s the lowest I’ve ever felt.

On when she finally went into labour:

C: When I was 32 weeks I woke up at 3am and started getting stomach cramps. I thought it was food poisoning, but I took myself off to the hospital. By the time I arrived, my contractions were three minutes apart and I needed an emergency Caesarean. I called Chris who was on air at the time [he’s a DJ] and said: ‘You better get over here!’ They wouldn’t give me any drugs until I was in surgery. I was in absolute agony.

On if she got to see Sienna straight away:

C: I saw her for ten seconds and they whisked her away to intensive care. Chris came down and said: ‘She’s so beautiful.’ I held her for the first time the next day. I fell absolutely head over heels in love. I never thought I would feel so bonded to another human being. When you feel that sort of love, you also feel powerless. If anything happened to her, I would break in two.

C: Like a  beautiful little sparrow. She had the most gorgeous face, but her body was tiny and when she cried and wrinkled her face, she looked like an old woman.

On how much she weighed at birth:

C: She weighed 4lbs 1oz when she was born and went down to 3lbs 8oz in special care. It’s hard to find clothes small enough. There’s a company called Teddy and Me that does gorgeous premature baby clothes. They made her look like a little human being rather than bones and skin. 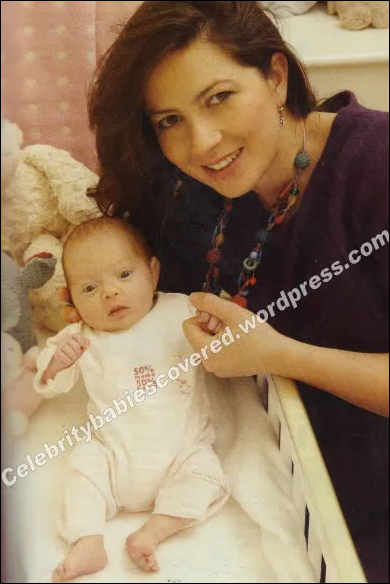 On how long Sienna was in hospital for:

C: Five weeks. I discharged myself after 36 hours and then I’d do 12 – 14 hour days sitting by her cot. When I arrived in the hospital every morning, it was like the walk of fear going along the corridor wondering what I was going to face that day. Some days we were celebrating and thinking she’s going to be out soon and then the next day there’d be doctors surrounding her. It was an emotional roller coaster and I spent days crying my eyes out.

On the worries of having a premature baby:

C: At 32 weeks, you’re out of the woods for many things, but there’s still a lot that can go wrong. Sienna had problems breathing and she had an infection on her lung. There were a few times she stopped breathing when I was holding her. Chris and I went on a course to learn how to resuscitate her. The care given to her was just amazing.

On what the special care baby unit was like:

C: There were babies in there much sicker than Sienna. Some days you’d come in and there were empty cots and you didn’t know if the babies had been transferred to another hospital or if they had died. Chris and I really found it hard.

On knowing they could finally bring her home:

C: We were skipping for joy. It was a week before Christmas and it was snowing. It was magical.

On if she has to have any special care at home:

C: I have medication for her reflux [stomach acid]. I’m breastfeeding her, but I also give her formula to build her up because she’s still anaemic.

C: I wanted to call her Serenity, but Chris said it was to hippyish. Sienna was a compromise.

C: We’ve frozen some embryos and I’d like to have more if we could.

On how Chris has taken to fatherhood:

C: He’s completely smitten. He’s not as confident as me and thinks I know best, but I think that will change over time.

On if Kate Garroway has met Sienna yet:

C: Yes, Kate has been round every day with Billy. They hang out together. They’re going to be chums when they’re older, or maybe more! Having Kate as a mother-in-law to Sienna would be fantastic! Kate has been really good with advice and she also brings round things she thinks I might need.

C: I’m not as paranoid as I thought I’d be. I feel very confident with her and my feelings for her are so much stronger than I’d expected.

I love cuddling her and watching her sleep. I love talking to her and seeing how she develops every day. She weighs just under 7lbs now. She’s putting on weight like there’s no tomorrow. I love sharing her with my friends and family. Moments like the first time my parents held her — I’ve dreamt about that for years. 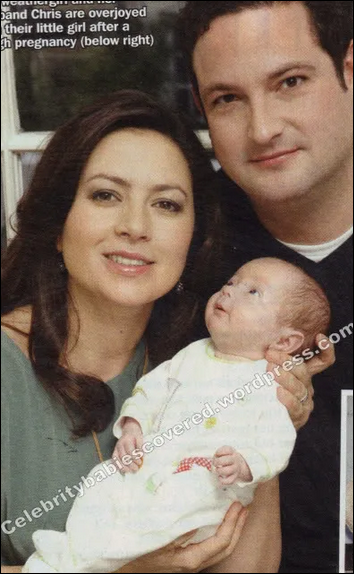