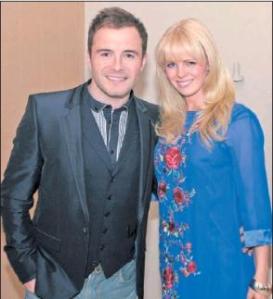 Westlife star Shane Filan has revealed that his newborn son Shane Peter, 9 days, had in fact not been due for another 12 days before he made his January 22nd entry. He said:

“He certainly didn’t keep us waiting. He wasn’t due until early February, and up until 8 p.m. last Friday there was no sign he was on his way. But an hour and a half later, he was here.

There was no panic or anything like that, but we certainly weren’t expecting it. Gillian started having pains at about eight o’clock, we went straight to Sligo General, and the baby was born exactly one hour and thirty-four minutes later.”

The Irish singer also explained the reason behind his baby boy’s name.

“It’s a family tradition to name children after fathers and grandfathers [elder son Patrick Michael, 15 months, was named after Gillian’s dad] so we’re just following that really. I suppose I’ve always wanted a son named Shane, so I’m thrilled about that.”

Speaking again of the birth, he had nothing but praise for the maternity staff at Sligo General Hospital.

“They were all fantastic. Our gynaecologist, Dr Heather Langan, made sure all ran smoothly, and midwife, Carol, who helped deliver Shane, was a real angel. Everything happened so quickly, and we were all really well looked after.”

With the couple now having three children under the age of 5 and he himself about to embark on a tour with Westlife, the 30-year-old says they aren’t planning anymore any time soon.

“We’ll certainly have our hands full for a while, but we love it. You’d better ask Gillian [but] it certainly is [enough] for now!”

As well as sons Patrick and Shane, he and wife Gillian are also parents to daughter Nicole Rose, 4.