Denise Van Outen appears in this week’s edition of Hello! and shared some exciting news — the baby she is expecting with husband Lee Mead is a little girl! The six months pregnant TV presenter also talked about how her pregnancy is going and the nickname she and Lee have given to their little one.

On having a feeling she was pregnant:

Denise: Other people noticed it before me. I was at a barbecue at a friend’s house in the summer and because I don’t really drink when I’m working I hadn’t had a drink for weeks. My friend poured me a glass of rose and I had a couple of sips and said: ‘I feel quite drunk.’ She laughed and said: ‘You’re not pregnant are you?’ I’d had so much going on that I hadn’t really thought I could be, then it dawned on me that maybe I should do a test. On buying a pregnancy test:

D: We were at home and [Lee] said: ‘I just know you’re pregnant!’ I was the one going: ‘Oh, I don’t know.’ We were both really, really excited. Then, just after I found out, I went on a trip to Jamaica with a close friend — it had been booked for weeks as Lee was working — and it gave me the chance to sit by the pool and absorb everything and get excited.

On the changes in her body:

D: It’s like looking at somebody else’s body. I kind of like the changes, but it’s weird. In this industry, you’re really conscious of how you look anyway and spend so long trying to have a nice body and caring about your appearance, but suddenly everything goes out the window and Mother Nature says: ‘Right, this is how it’s going to be.’ You have to accept it and go with it. It’s the one time you can enjoy putting on weight. 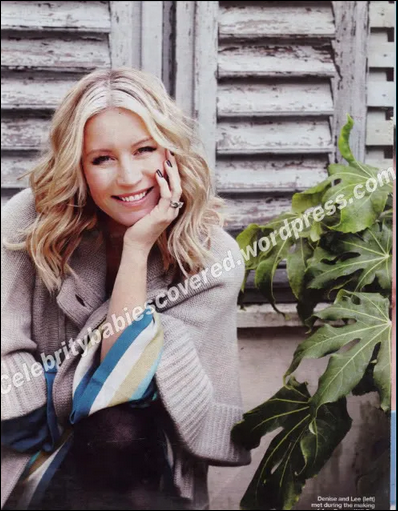 On finding out the baby’s sex:

D: We wanted to be organised, and a few of my friends who have found out said it was a really nice way to bond. Some people prefer not to know and I totally respect that, but we wanted to. Lee is in a play at the moment and is away a lot. I think he wanted to feel that he’s part of it. It didn’t matter to us what we had, but I feel comfortable because having a little girl feels more familiar to me and I know Lee is really excited.

I think finding out has been the most euphoric, emotional part of the pregnancy because it made it feel real. We didn’t have a preference, we just want the baby to be healthy. But it means we’re getting excited about things we’re going to do like: ‘Oh, I’ll be able to take her out and buy her a fairy costume!

On if they’ve already picked out her name:

D: [We’ve chosen] a quite traditional name. At the moment she’s code-named Teapot. I asked my friend’s little girl what she thought we should call our baby and she said, ‘Teapot.’ On talking to her daughter:

D: At night I do because she’s moving around quite a lot. I’m like: ‘What are you doing?’ I’m convinced that she’s got jazz hands already. She’s probably doing high kicks, making up dance routines.

On what type of birth she wants and if she’s nervous:

D: I would [like a natural birth]. I know people who have had emergency Caesareans and said that they’ve prepared themselves for a natural birth, so they felt a bit of a failure when it didn’t happen. I don’t want to get myself into that headspace, just in case. I’ve got back problems, which is one of the reasons I’ve been keeping fit, to keep my back strong, so we’ll have to see.

I watched the documentary that Amanda Holden made about becoming a midwife, and I thought it was amazing but it scared me. I’ll worry about it nearer the time. On if Lee’s been fussing over her:

D: Yeah, I feel so lucky to have a husband like him because he’s really understanding and patient. He surprises me with little things. He’s very romantic, like he came home and said: ‘I’ve booked you a pregnancy massage.’ And he has had to put up with me getting in to bed every night completely covered in stretch mark creams and oils because I’m paranoid about getting stretch marks. I go to bed like a greasy chip every night.

On if she’s worried about losing the baby weight after the birth:

D: I’m not going to rush. I’ll do it in good time with the advice of Nicki [personal trainer], and I know that I’ll do it safely. I would find it quite odd to lose it really quickly. It takes nine months to make this baby and I think you should really allow yourself the same amount of time to get back to normal. I’m not going to put myself under any sort of pressure. 9 thoughts on “Denise Van Outen Talks About Her Pregnancy”