Athlete Paula Radcliffe and husband Gary Lough introduce their second child and first son Raphael, 6 weeks, in a recent issue of Hello! Magazine with daughter Isla, 3 1/2. Together they talk about their now family of four,  parenthood and their baby boy’s dramatic birth on September 29th after 27 hours of labour at Monoco’s Princess Grace Hospital.

On being induced because the medical staff feared Raphael was going to be too big and not going in to labour naturally:

Paula: I wanted whatever was best for the baby. I’m not one of those women who think you have to have a natural birth to feel like you’ve had a child. I think that’s the way nature designed it, so if it works that way, that’s probably the best thing. But I was on the watch list all the way through because my pelvis is narrow and Isla had a hard time getting out. 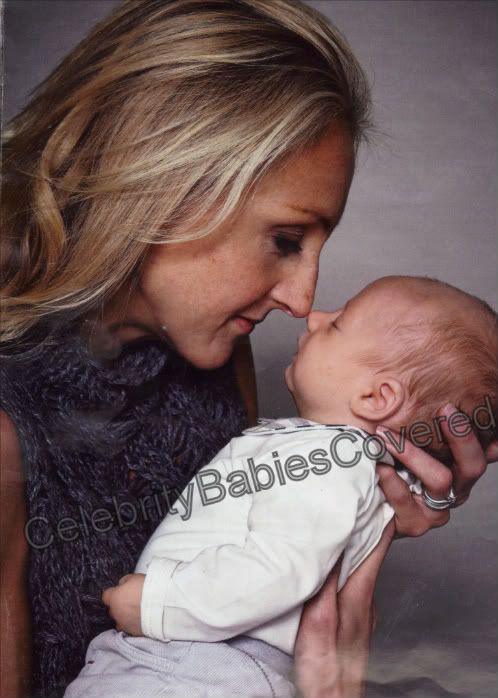 P: [The doctor] didn’t tell me [anything was wrong] because he thought it would panic me. He just said: ‘I think you can get this baby out really fast.’

Gary: When the baby’s head started to be visable, I went to walk round and [the doctor] stopped me.

P: He had the cord wrapped twice round his neck. It was like a training session with them all yelling at me, ‘Go on!’ Normally you take your time and recover in between pushes, with this one they were saying: ‘Go again.’

It was just three pushes, but then I heard Gary go: ‘Oh my God,’ and I looked at Raphael and he was all grey. They whisked him away and I didn’t get to hold him at that point.

I couldn’t move at all because the placenta was still attached, so I was relying on Gary to let me know what was happening. I was trying to see and going: ‘He’s not crying,’ and Gary was panicking and saying, ‘His heart’s not beating.’ After a couple of minutes, they got a resuscitation bag and inflated his lungs. Then he started crying and it was just the best sound.

They put him in an incubator for an hour and I was able to hold him after that. He latched on straight away and fed. Since then, we haven’t looked back and he’s put on weight straight away. 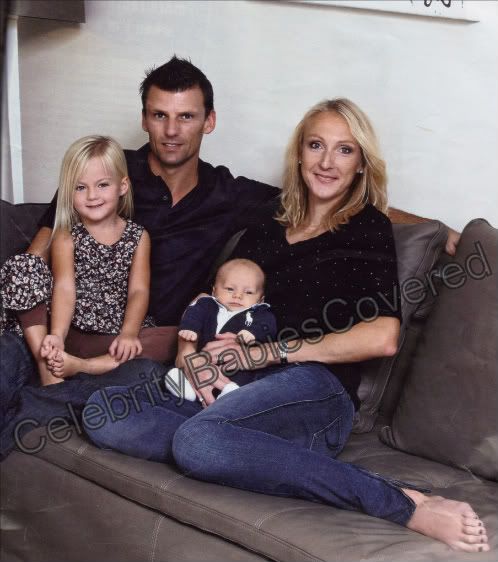 On what it was like when she eventually held him:

P: It’s really hard to put in to words how I felt. I just look at him and think, ‘Everything’s ok,’ and it’s a huge relief.

On if she’s glad she didn’t know the problem with the umbilical cord being round Raphael’s neck beforehand:

P: Yes, I think we would have panicked. The doctor was so calm and I think between one of the contractions, he got one of the loops away from his neck. They explained everything afterwards.

On how Raphael’s doing now:

P: He’s really good. We were worried there would be long term effects, but the doctors told us he was fine. He actually seems more chilled than Isla. On how long she was in hospital for:

P: They kept Raphael in an incubator overnight and brought him to me every time he needed feeding. I stayed in for four days, which is a day longer than usual in Monaco, because they wanted to make sure he was fine. I’m glad, because it gave me the opportunity to concentrate on him, but I was pleased to get home, because I missed Isla.

On exercising right up until Raphael was born:

P: I had a break of around three weeks at eight months when my back got really sore and I wasn’t able to run, but then the last week it kind of cleared up and I was able to do a few little runs. I was able to run pretty much every day until about 35 weeks, and then I had the time where I could only aqua jog or walk, before I went back to it. But they were really slow jogs and it was really just to get out and enjoy the fresh air.

On how people reacted to seeing an eight month pregnant woman running about:

P: You still get the odd person who thinks that you should be sitting at home eating chocolate. If anybody says to you that something you’re doing isn’t good for the baby, it’s hurtful. But research shows that exercise is one of the best things to do for the baby. This time round I was a bit calmer as I knew I wasn’t doing anything different to what I’d done with Isla and she is very healthy. 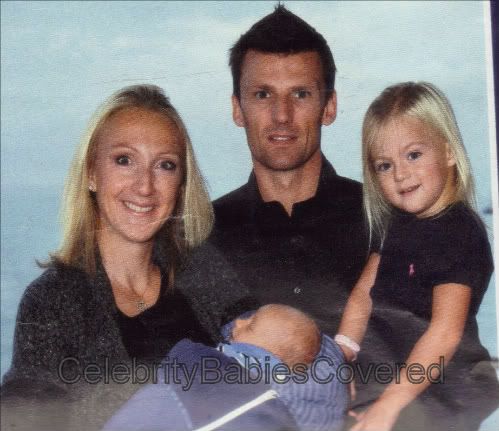 On if she thinks her children have benefitted from her high fitness levels:

P: The doctors have said how tonique [toned] they both are. If you’re fit while you’re pregnant, your children are less prone to obesity and diabetes later in life. Also, as they were subjected to small amounts of adrenaline, they handle stress better.

On if motherhood has changed her attitude towards running:

P: It’s still impotant to me and when I’m not doing it, I feel a little tiny bit of me is missing. But at the same time, motherhood puts things in to perspective. When I come home after an injury and gives me a big hug, it makes it feel that it’s not the end of the world. My children mean that I’ve also got more motivation and reasons to do well when I’m competing now. And if I’m happier, I run better.

On if she’d like her children to be sporty:

P: We’re not going to push them, but I’ll encourage them to try all different sports. Isla doesn’t need much encouraging. If she goes on a track, she is more likely to run part way and then do something else. But we’re trying to teach her track etiquette, so she doesn’t get in people’s way.

G: She gets us to do little races for her and go: ‘On your marks…’ She’s very competitive. 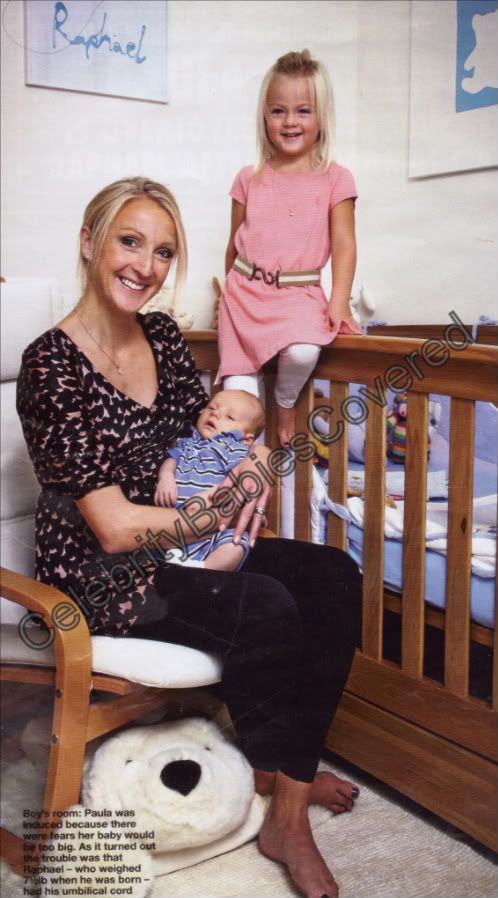 On if she’s glad she waited till now to have children:

On what type of mother Gary thinks Paula is:

G: Really, really good. She’s very calm. When Raphael was a week and a half old, she took him on a flight to Germany by herself — I think I would have been freaking out. Her public persona is someone who is very determined, and as a mother she is totally different to the person you see at the start line. She’s driven as an athlete and as a mother, but it translates in a different way.

P: The other day a friend said to me. ‘You’re a really good mum,’ and that meant a huge amount to me, that meant much, much more than if someone had said, ‘You can run really well.’ 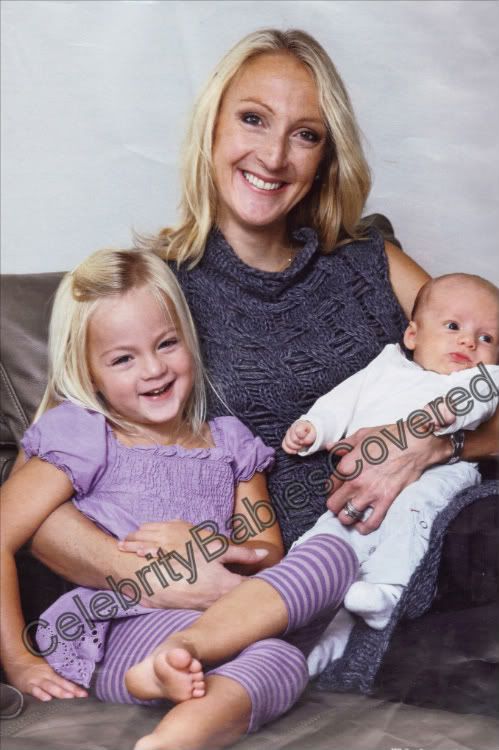