Singer Celine Dion introduces her adorable non-identical twin sons Nelson and Eddy, who were born on October 23rd 2010, in this week’s edition of Hello! Canada. During the interview, she also revealed the meaning behind her baby boys’ names — both being named after influential people in Celine’s life — South African President Nelson Mandela and lyricist Eddy Marnay.

‘We wanted our sons to be able to say they were named after two wonderful people.’

She also spoke about her difficulty to conceive and originally being pregnant with triplets.

“One little baby decided to step back to help the other two survive. The doctors said to me if there’s something wrong, natures takes it’s course. I still think of the one who stepped back. I’m sure every woman has the feeling about the little one that’s not there.”

Celine and husband Rene are also parents to son Rene-Charles, 9.

Full interview and pics will hopefully be up on Celebrity Babies Covered next week! 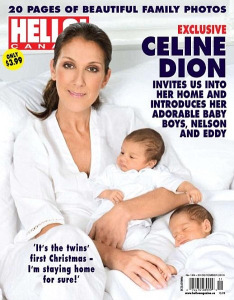