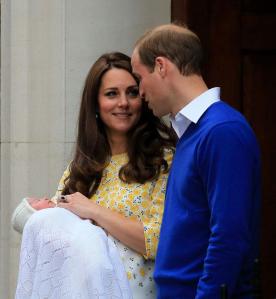 New parents Prince William and Kate Middleton have named their baby daughter Princess Charlotte Elizabeth Diana. The name is thought to be in honour of her Grandfather, Prince Charles, Grandmother, the late Princess Diana and Great Grandmother Queen Elizabeth II.

She was born at 8:34am on Saturday, May 2nd 2015 and will be known as Her Royal Highness Princess Charlotte Of Cambridge. She joins big brother Prince George Alexander Louis, 22 months.