When you find out you’re pregnant you start to plan out your birthing plan — do you want a home birth? water birth? Pain relief? However, no matter how much you map it all out — sometimes the experience can be a thousand worlds apart from what you expect or want. When singer Kimberley Walsh gave birth to son Bobby Jay on September 4th 2014, her delivery was also one that wasn’t as straight forward as she’d envisioned. Speaking to Mother & Baby magazine, she said:

I opted for an epidural before he was born. It would have been absolutely horrific without one.

Bobby turned at the last minute making it virtually impossible to push him out. If I had panicked I would have ended up with a C-section and it was very touch and go.

The doctors had to use forceps to move his head down and when he came out his face was looking up at us!

Continue reading to see an additional photo and find out about Kimberley’s difficulties with breastfeeding and how she’s not stressed out about getting her pre-pregnancy body back.

Even breastfeeding had its obstacles when Bobby was unable to latch on to feed.

Bobby wouldn’t latch onto my boob which I found very distressing. It turned out he was tongue-tied and so they snipped his tongue. That really helped but it was hard for him to learn ( to feed) because it was new to him. Now 8 months in to motherhood the 33-year-old says she hasn’t been in any rush to get her body back to what it was pre-pregnancy.

I think I’m a positive role model to other women who might find comfort in the fact that I did not spring back into shape. ‘It’s good for other women to see that not everybody just snaps back straight away. 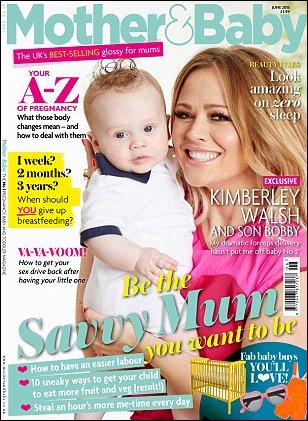