Former Escala quartet member Izzy Judd has revealed that she and husband Harry Judd had to rush son Kit Harry Francis, 3 to accident and emergency a few days ago due to him having a reaction to the annual pre school jabs. Taking to Instagram to share with fans, she said:

Went to A&E tonight as Kit had a reaction to his pre school boosters. Poor Kit has always been sensitive to his vaccines BUT thank goodness for vaccines!! Being in a hospital sent my anxiety flying, just can’t bear to think of the scenes behind the wall of the Children’s department (which was empty). Usually at this time of year we’re facing the back to back colds and bugs with the kids, it felt really weird today giving Kit medicine after so long.

As ever thank you to @nhsengland and the kind doctor who took care of us tonight. We are so lucky. Oh the worry when our little ones are poorly…

This is the second visit to A & E in a matter of weeks for little Kit as he had to previously seek medical attention due to falling over and cutting his chin on a tree branch. Izzy and Harry are also parents to daughter Lola Rose Emma, who turns 5 on January 25th. 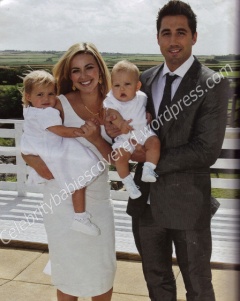 If there’s one thing that 7-month-old Dexter Lloyd Henson loves, it’s attention. So when more than 100 guests gathered on Saturday, August 29th, at the the family’s farmhouse in Wales for a party to celebrate his Christening, Charlotte Church and Gavin Henson‘s little boy was in his element.

As with the Christening last year of Dexter’s big sister Ruby Megan, 2 on September 20th, the service itself was an intimate affair, attended only by immediate family and godparents — but come the evening all the stops were pulled out, with continious entertainment, a fully stocked bar, fireworks and food in a giant marquee in their garden.

Like his mother, sister and grandmother, Dexter’s baptism took place at St Mary of the Angels Catholic Church in Cardiff. Father Christopher Delaney, who baptised Charlotte as a baby and who baptised Ruby last year, conducted the service.

“Everyone knows Father Delaney,” says Charlotte. “He has been around since my mum was at school. He’s brilliant because it’s all quite informal, and rather than just saying the words, he explains each part of the service as he goes along. He usually gives a little serman in the middle of it all, which is generally very charismatic and funny. He’s a real charecter — and reminds me of [Comedy actor] Gene Wilder.”

Charlotte’s best friend Naomi Holland, whom she has known since she was five, was chosen as Dexter’s godmother, and executive producer Nick Fiveash, who has known her since she was 14, was godfather.

“I was going to ask my friend Kyla to be godmother as well, but she just had a baby herself and I didn’t want to put too much responsibility on her. We’ve chosen people who are going to play a big part in Dexter’s life anyway and guide him on his spiritual path.”

When he arrived for the church service, little Dexter looked super cute in linen shorts and baby socks with crosses on them — from childrens wear company Little Darlings. Meanwhile, Ruby, who turned up clutching her favourite blue elephant, looked like a princess in a white satin dress, which was also from Little Darlings, and was dotted with diamante.

Just before the party kicked off, proud parents Charlotte and Gavin sat down with Hello! for a chat about the day so far, what was in store next and their future plans.

To read the interview and to see additional pictures click END_OF_DOCUMENT_TOKEN_TO_BE_REPLACED

Singer Peter Andre enjoyed some Spanish sunshine with children Junior Savva, 4, and Princess Tiaamii Crystal Esther, 2, on Thursday, September 3rd. The trio along with Pete’s parents, brother Mike and manager Claire enjoyed a nice relaxing boat trip. After the boat trip the party stopped off at Greek restaurant Red Pepper for a bite to eat, with Peter tweeting,

“Beautiful day with munchkins on boat and lunch at red pepper Greek restaurant on port. I like a da Spain…ole.”

Unfortunately Harvey, Daniel, 7, was unable to make the trip due to important hospital appointments. 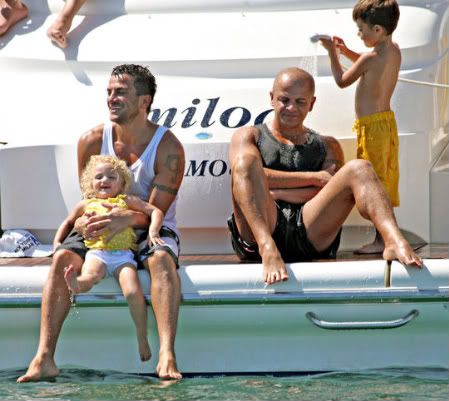 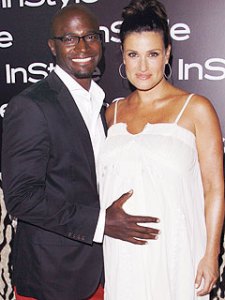 “Mother, father and son are all doing well.”

Nick and Nikki Hexum have welcomed their first child. Daughter Echo Love was born at home at 4am on Saturday, August 29th. New dad Nick tweeted:

“Words cannot describe how amazing it was. Time to go to bed…” 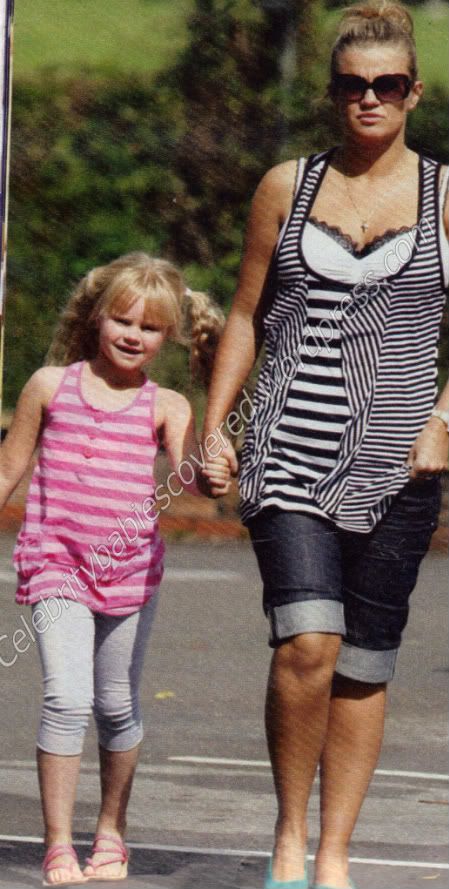 Singer Lisa Loeb and husband Roey Hershkovitz are expecting their first child together. A rep for the couple confirmed,

“They’re excited to welcome their first child this winter.”

Singer Pete Wentz juggles daddy duty with a couple of coffees as he and son Bronx Mowgli, 10 months, went to Starbucks in Los Angeles on Tuesday, September 1st. 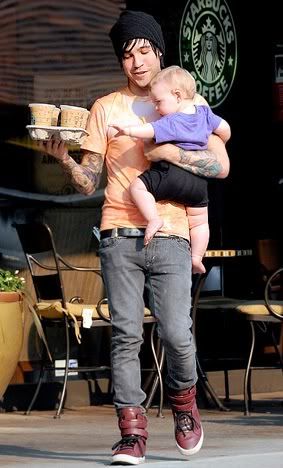 Singer Lionel Richie and daughter Sofia, 11, attended the Official Launch Of New Disney & Muppet Myzos at Fred Segal in Santa Monica, California on Saturday, August 22nd. Lionel is set to become a grandfather for the second time in the next month when older daughter Nicole, 27, gives birth to her second child. He is also dad to son Myles, 15.

It would be difficult for anyone to look more relaxed — or prouder — than Ricky Martin. Weather he’s carrying his adorable twin boys Valentino and Matteo or laying with them on a beach, he looks to be in his element as he celebrates their 1st birthday in Miami.

To read more about the twins and Ricky, and to see additional photos click END_OF_DOCUMENT_TOKEN_TO_BE_REPLACED