Music star John Legend and wife Chrissy Teigen grace the front cover of Vanity Fair’s December 2019 issue with children Luna Simone, 3 and Miles Theodore, 17 months. Inside they talk about their love for each other, childhood traumas and the white house while also posing for several snaps with their little ones.

She has the body and looks that can make many women envious and she also features in the 2016 swimwear edition of Sports Illustrated but presenter/model Chrissy Teigen has revealed that she was actually going through IVF treatment at the time of the shoot that took place in Zanzibar.

“I was getting my shots and everything in Zanzibar, I had a little medical kit. ‘It was hard because you bloat from it, and you bruise – if I hit the wrong area. That’s the kind of things we had to cover with makeup.”

Now expecting a baby girl in April with husband John Legend, the 30-year-old says despite the fact many choose to pose for a shoot during their pregnancy, it’s not something she would do for her own personal use but she would take the time to consider doing something like that for a magazine — if it was for the right one.

“John and I aren’t the kind of people to have a photo of ourselves in our house, like embracing the pregnant and naked thing. But if it were for a cool magazine and beautifully done, I would do that…[Sports Illustrated Swim Edition], I would have definitely done pregnant!”

Chrissy Teigen and husband John Legend attended the Grammy Awards in Los Angeles on Monday, February 15th. They expect their first child together – a girl – in the Spring. 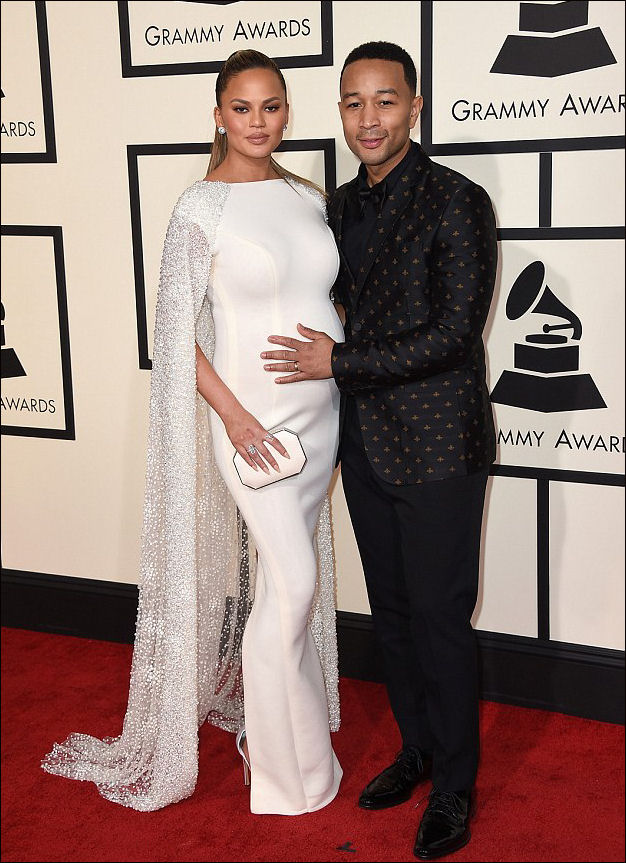 Chrissy Teigen and husband John Legend were all smiles when they were spotted out and about in West Hollywood on Thursday, February 4th. The pair expect their first child — a girl — in coming months.