Coleen Rooney took sons Kai Wayne, 5, and Klay Anthony, who turns 2 on Thursday, to Old Trafford in Manchester to support their footballer dad Wayne Rooney as he played in a premiership game on Sunday, May 17th. After the match they also went on the pitch with their dad. 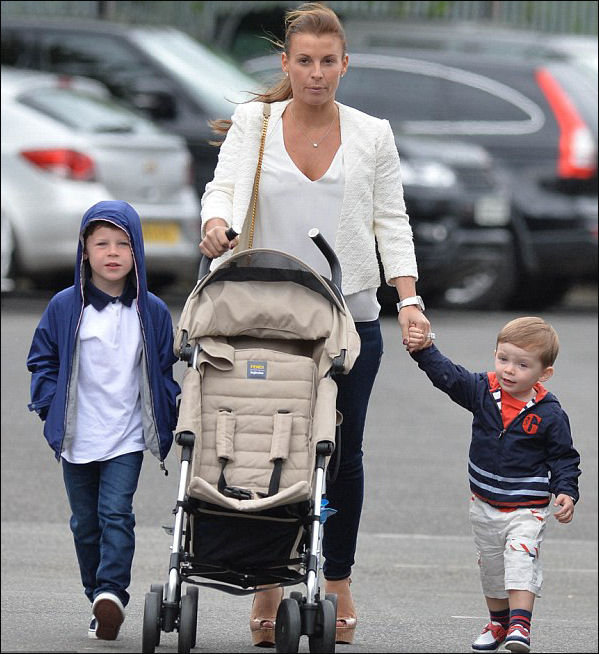 Having a professional footballer for a husband and being a mum to two boys – sons Kai Wayne, 5, and Klay Anthony, 23 months can mean that Colleen Rooney and husband Wayne [Rooney] often find it hard to have some one-on-one time. However, she tells the Daily Mail that they make sure to dedicate at least one day a week to themselves.

“When we had Klay we found that we really had no time at all but then we made sure that we had that one day a week together.

When Wayne has international commitments – like for the World Cup – it means that the 29-year-old is left to look after the boys. But luckily help is always on hand from family if she needs it.

“I’ve got a great family behind me and Wayne’s family too so we’ve always got people around us – we’re not just on our own.

“We do miss him and seeing the kids’ faces when he comes back, they’re just so overwhelmed, which is nice.”

Now that 5-year-old Kai is starting to follow in his dad’s footsteps and get in to football it means that Liverpool born Colleen will be soon driving her son to and from various matches. With that in mind, she has signed up to McDonalds Football Mum of the Year  – which plans to recognise a parent’s invaluable support and dedication for their child’s football activities.

A lot of people think it’s dads who take children to football but I think it’s about time that we recognise what the mums do.

I know for Wayne, that when he knows we’re there, he gets more of a buzz. It was the same at the World Cup, obviously, I wanted to take the kids for them to experience it but also to support Wayne.

The McDonalds Football Mum of the Year award will be presented at Wembley Stadium on August 2nd 2015.