Who is this little cutie? It’s 8-month old William “Billy” Draper — son of GMTV presenter Kate Garraway and husband Derek Draper. The cutie — wearing a blue woolly hat accompanied mum Kate to a gala screening of How To Train Your Dragon in London on Sunday, March 28th. 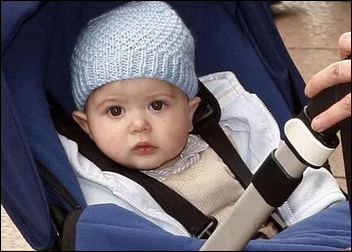 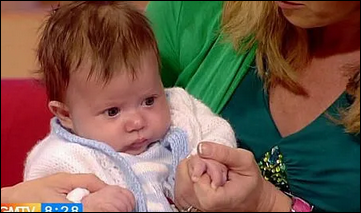 TV presenter Kate Garraway has revealed that her baby son William “Billy”, 7 weeks has come down with a cold — and he’s a typical male about it. Speaking in her New Magazine column she said:

“Billy has come down with his first cold and reminds me of a sad, snuffly piglet! Normally when he’s hungry his cry is really urgent, as if to say, ‘Come on, I want that milk now!’ But since he has been ill, it’s been more like a slightly pathetic ‘bleat’ — like a kid goat! I told Derek, “He’s a typical man: he’s got a cold and it’s all a huge melodrama!”

The 41-year-old also says his male characteristics don’t stop there.

“I took him with me for a hospital check-up [Kate suffered from the breast infection mastitas after Billy’s birth and had to undergo surgery a couple of weeks ago] and the specialists made such a big fuss of him. Billy suddenly perked up and started cooing and giggling — really playing to his audience. As I sat there I realised he was displaying another male characteristic — he already loves female attention!”

Last week was also the first time Kate took Billy in to meet all her work colleauges at New Magazine.

Gmtv host Kate Garraway multi tasks having her hair done at London Salon while giving son William “Billy” a bottle of milk. She and husband Derek Draper are also parents to Darcey Mary, 3.

If you want to see more pics of Kate and Billy check out one of our previous posts when Kate and Derek did an interview and introduced him in OK! click  HERE 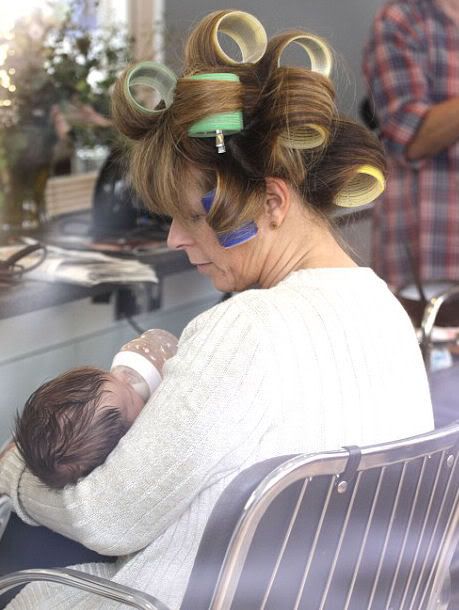 GMTV presenter Kate Garraway and husband Derek Draper feature as the cover stars in this week’s OK! magazine with newborn son William – or Billy as they will be calling him for short. She and husband Derek also have three year old daughter Darcey Mary.

The pictures were actually taken exactly one week after their son’s July 28th birth and it’s hard to imagine whilst looking at a radiently smiling Kate, that she went through quite a traumatic experience during the birth. Explains Kate,

“At one point the baby was very active and wriggling around and slipped to the back of my back which meant the midwife suddenly couldn’t hear his heartbeat. It was only for three minutes but to me it felt like an hour and I just thought: ‘Oh God.’

is ‘beside herself’ about her new baby brother.

When asked if they’d like to add to their brood, Kate replies,

“I’d do feel like I want one more but I might be high on hormones. I said to Derek: ‘I’ve really got the swing of this now.’ But maybe I should wait until he’s a month old or teething!’

To read the interview and to see additional pictures click END_OF_DOCUMENT_TOKEN_TO_BE_REPLACED